In 1883 crested geckos was re-classified as Rhacodactylus ciliatus by Boulenger which was undone by Bauer et all in 2012. Very little was known about these geckos at the time and only a few specimen were collected. In 1993 Bauer and Sadlier listed Correlophus ciliatus as probably extinct. This gecko was only known from 16 specimens collected from a single locality on Grand Terre, it was presumed crested geckos were extinct as they had not been seen or collected for over a century (Bauer & Sadlier 1993).

Only in 1994 the gecko was rediscovered on the Isle of Pines by German herpetologists. From only a few specimen Correlopus cilliatus became very well established in captivity over the past few years, and is now one of the most kept gecko species in terrarium today! 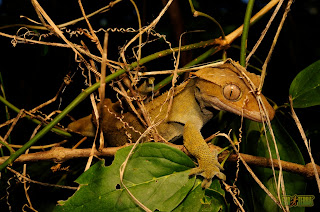 Posted by Emmanuel Van Heygen at 16:04